Blue Nebula supports, as of yet, the good ol’ Red Eclipse auth protocol. We call it the legacy protocol.

This page contains a high-level as well as a low-level description of the protocol. These information were reverse-engineered from the source code of Blue Nebula, and implemented in the Python masterserver and bluenebula-auth open-source projects. The latter is a full standalone implementation, and can be used for evaluation purposes.

This protocol has several design flaws, so it will eventually be replaced by a robust alternative.

The auth protocol is used for two purposes. Its original use case was to allow users to authenticate on servers using a centralized authentication server, the master server. This concept has originated in Cube 2: Sauerbraten, where global admins could use it to authenticate on all servers that were hosted on the official server list, and perform some moderation.

In Red Eclipse, the concept was extended with a basic roles concept. This way, permissions, especially the global ones, could be granted to players more fine-grainedly.

As mentioned before, the original and most well-known use case of this protocol is user authentication. Red Eclipse introduced multiple roles to grant users permissions with. Some of them can be assigned locally on servers, some of them only in the global scope.

can be assigned server-locally by admins to owners of an account or by an active admin using the addpriv command, both in-game and in the server configuration

The general workflow is described in the sequence diagram below. 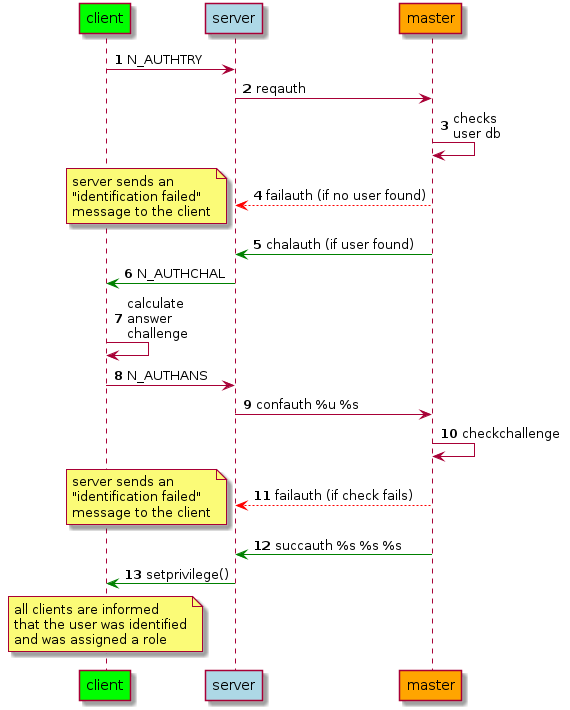 Whenever a failauth message is sent, the process is aborted by the server.